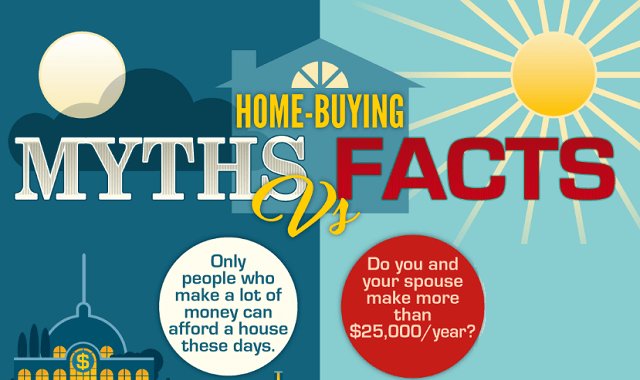 In a post-2009 world, many people are understandably wary of home-ownership and think that the expectation to gain real estate in one’s 20s or 30s is a thing of the past. While it’s true that buying your first home is something to be taken seriously, there are many things that the younger generation takes for granted. Owning a home takes effort, time, and budgeting, but it’s not impossible. We’re exploring what first-time home-buyers should know, including the top myths versus facts of home-ownership.

In a world where nothing is certain, the housing market became an even more terrifying uncertainty between 2007 and 2008 and beyond after the bursting of the housing bubble and the subsequent recession that sent our country (and a lot of the world) into a tailspin. Since then, many misconceptions, myths, falsities, and downright lies have made buying a home seem like an impossibility for most. The truth and the facts, as it turns out, are the exact opposite. Many think that only people who make a lot of money can afford to buy a home but the fact is that if you make more than 25,000/ year, you absolutely can afford it! Do you think you need a great credit score to buy a home? Wrong. The truth is you only need a 580 to apply for a mortgage!

Another interesting tidbit is that the average age of a first time home buyer is 32 and a half. This infographic from the folks at Titlemax.com teaches the real facts about the real estate market and how possible it is for everyone to buy a house.

0 0 0 0 0
Previous : 8 Warning signs that your staff are about to quit
Next : Famous Canadians Infographic