Arm Yourself With The Facts On U.S. Gun Ownership

As the saying goes, there are two sides to every coin. With regard to gun ownership, there are those who push for tighter gun control, and those who champion the constitutional right to bear arms.

For whatever side you’re on, the statistics related to gun ownership and crime paint a very unclear picture. The U.S. has the highest rate of private gun ownership in the world, but it does not rank even close to No. 1 for global gun violence.

What anti-gun advocates also don’t want to recognize is that even as gun ownership rates have increased, gun-related crimes have dropped. In fact, according to a study by the U.S. Department of Justice, gun-related homicides decreased 39 percent over 18 years. From that statistical roundup, anti-gun sentiments don’t stand much ground.

And then there are the poignant discussions of the fundamental human right to bear arms, and the right to protect ourselves from someone bearing arms.

In light of the slew of mass shootings in the last couple years, advocates for gun control say tighter gun laws will protect our children. On the flip side, gun-rights advocates say tighter controls wouldn’t stop future killings; it would just create more red tape for those trying to secure a gun the legal way.

He has yet to provide any feasible solution. Most recently, Emanuel revealed a plan to instill a waiting period to purchase guns, and to limit gun purchases per month. But his proposal attempts to curb legal sun sales; the majority of guns used to commit crime in Chicago are obtained illegally.

Between mass shootings, urban warfare, and localized crime, gun owners just want to protect themselves. Since police aren’t legally obligated to respond to a call for help, self-defense is up to the individual. Legislation that curbs gun possession also limits an individual’s ability to fight off an attacker.

Here’s an infographic from Instant Checkmate that breaks down the statistics on gun ownership in the U.S. Once you’ve been armed with the facts, you have to decide how to use them. 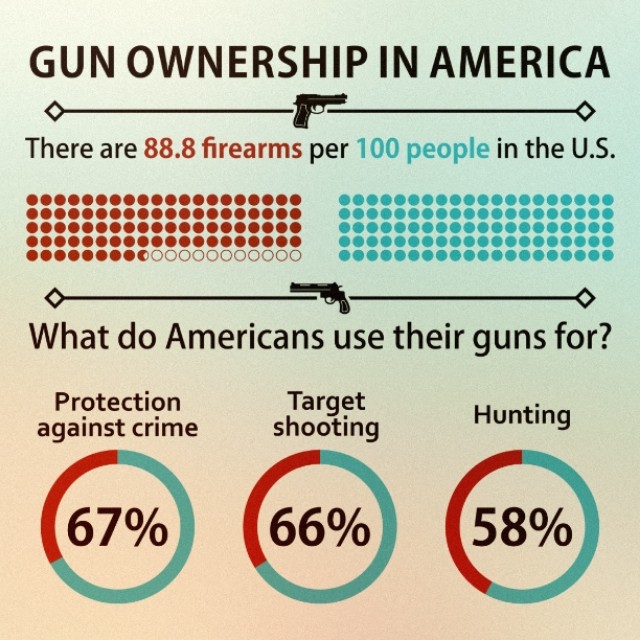 0 0 0 0 0
Previous : 37 Digital Marketing Strategies; The Internet Marketing Tree
Next : What Killed The Infographic?