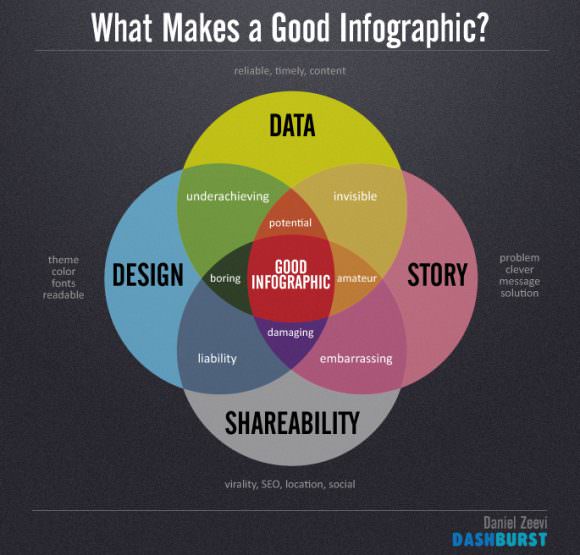 The number of web users searching for infographics has exploded over the past few years. Between 2012 and 2014,demand for infographics increased by 800%, and there’s little reason to suspect that the web’s appetite for them has dropped off.

In today’s world of information overload – which, according to research, has rendered the human race with a shorter attention span than that of a goldfish – visual marketing is increasingly proving to be the solution to grabbing and holding audience attention.

Our brains process visual information 60,000 times faster than textual information, and so it is towards the visual that marketing has naturally evolved. Brian Hughes from Social Media Today puts it best in an article from October last year:

“On average, it takes 50 seconds to read 200-250 words but only 1/10 of a second to process a visual scene. Great visuals convey maximum information in as little time as possible.” 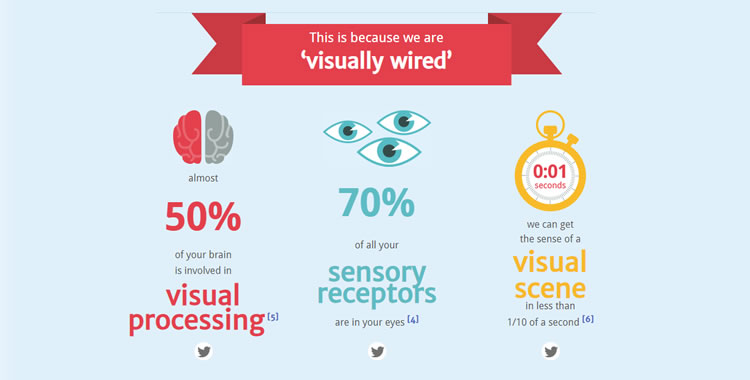 Conveying your most important messages quickly is one of the key benefits of a great infographic. And, when designed well and promoted properly, an infographic campaign grows website traffic by an average of 12%.

What’s more, according to an infographic by Top Marketing Schools, a single infographic has the potential to reach up to 15 million people on the internet.

These are impressive figures that no sensible marketer can afford to ignore.

But of course, it’s not simply a case of bashing together any old thing, hitting publish and hoping for the best. There are many things to consider when constructing an infographic campaign if you want to reap the most positive results, and unearthing exactly what those things are is the whole purpose of our blog post today.

Growing your site traffic essentially comes down to two important things – your ability to attract new visitors, and keeping them on your site once they’re there.

The Viral Appeal: Think Beyond Your Core Customer Base

Infographics can be one of the most valuable forms of inbound marketing at your disposal – all you’ve got to do is find the right topic and do your research.

And when I say “research”, I mean research into what your audience is interested in as well as researching the key facts and figures of your chosen infographic topic.

At the end of the day, an infographic isn’t going to garner lots of shares – and certainly won’t go viral – if it doesn’t address the wants and needs of the end user (aka your prospective customer). So, head onto your social networks and do some research into the common interests of your audience.

Let’s consider a hypothetical example. Let’s say you’re in the business of selling smartwatches – it’s likely that your core following will be interested in other wearable technology as well.

So, ask yourself – what is the state of the wearable technology market? Are there some wow-figures that indicate that wearable tech is going to start dominating the market in the next 5 or 10 years? Something like the fact that there are going to be 411 million wearable devices worth a mind-blowing $34 billion sold in 2020? That’s great stuff that would appeal far beyond your core customer-base for smartwatches. Indeed, it’s likely to impress even those who at the moment are showing only a passive interest in wearable tech.

When you gather this sort of data – and a bit more besides – into a hard-hitting, visually stunning infographic, the sharing potential suddenly becomes huge, and with more shares come more click-throughs to your website, which means more traffic.

Something like this from agricultural holding company Agroserv is a good example. Lots of data presented visually and memorably, ensuring that visitors aren’t bogged down in dense lists of numbers, but instead presented with something they can easily process and remember.

This is just an example of course – you could be selling strawberry jam or magazine subscriptions or cloud storage solutions or VoIP telephony or whatever else it might be. The trick with using infographics to grow your site traffic is to think in BuzzFeed terms of what’s going to make an impression on larger swathes of the internet community, yet stillremain germane to your niche.

Get the Headline Right

As with all of your content marketing output, headlines are key drivers of clicks-throughs.

Once again, your headline research should focus on your audience’s desires. Study your analytics. If they indicate that the list-posts on your blog get the most engagement, then the chances are that your audience will probably be big fans of your list-post infographics as well.

Give them what they want.

There’s a great free headline analyser tool from CoSchedule. Check it out. It’s primary purpose, of course, is to help you optimise the headlines of your blog posts and articles – but there’s no reason it won’t help you get the headlines of your infographics working a lot better for you as well. Aim for a score of at least 70, but the higher you can get it the better.

Create Memorable and Engaging Characters to Tell Your Story

Stories connect with people on an emotional level – and this is key to driving great engagement across all of your content marketing campaigns.

For the purposes of infographics, however, you have a unique opportunity at your disposal – the option to create characters.

Social Media Examiner is one of the most successful and popular blogs in the world – but when we call this great resource to mind, it’s perhaps not the actual written stuff that first jumps out, but the little explorer character that they have created to sit alongside all of their output. Know the little guy I mean?

There he is. Often he’s got his magnifying glass out, or sometimes he’s building a campfire, looking at a map, or sat down holding a microphone as if giving an interview. The point is, he’s a friendly little character that we like, and he forms part of the ongoing story that Social Media Examiner tells.

Of course, he isn’t just confined to site’s infographic output, but you get the point.

Using characters to tell the story of your infographic is an effective method to engage the emotions of your audience. And you don’t have to create one that serves to straddle all of your output either. If your infographic is talking about the power and strength of your solution, then think in terms of superheroes. Perhaps it’s intelligence that you want to portray, then how about bespectacled scientist with an Einstein haircut?

The trick is to use a character whose core traits – strength, intelligence, trustworthiness, curiosity – are immediately recognisable, and use this character to tell your infographic’s story.

Keeping Visitors On Your Site with Infographics

As a final word to this blog post, it’s worth highlighting one important added-benefit of great infographics – they keep visitors on your page.

Your average visitor will arrive at your site, have a quick scan, and then leave again in less than 60 seconds, according toresearch from Nielson/Norman Group. However, an infographic gives them something visually, emotionally, and statistically useful that will keep them engaged for just that little bit longer, giving each visitor a little pause for thought about what else your website has on offer, improving your bounce rate all the time.

And besides, even for those visitors who do just take a momentary glance over your infographic page, the very visual nature of infographics ensures that the key information that you want to share will be absorbed – which is practically impossible to achieve if all you present is text.

0 0 0 0 0
Previous : 4 Ways To Make A Killer Infographic (Without A Speck Of Data)
Next : The World Leaders With The Highest Salaries