With hundreds of strangers crammed into a confined space for long hours, it’s not unusual for travellers to feel unwell when they’re jetting to or from an exotic holiday destination.

Dehydration, bloating, decreased immunity or jet lag are among the common problems that spoil countless trips every day.

But there are a number of simple tricks travellers can follow to stay healthy during a flight and avoid any setbacks after they step off the plane. 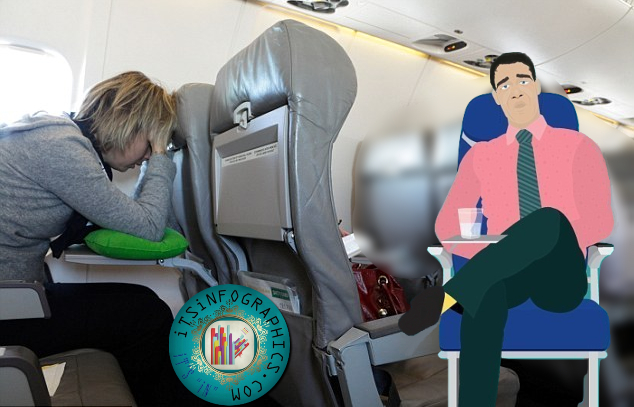 Dehydration, bloating, decreased immunity or jet lag are among the common problems faced by travellers

This infographic produced by Fix reveals how passengers can ease the stress of travel thanks to some simple preparation and wise decisions.

It all starts before passengers set foot on a plane, with their choice of food and drink.

They should drink at least eight cups of water per day in the days leading up to their flight, and bring a refillable bottle to the airport.

Travellers should avoid soda, burgers and fries and instead opt for a fizzy probiotic drink such as kombucha, lean grilled meats, yoghurt and raw foods such as carrot or celery sticks.

Once on board, travellers should continue to hydrate with water and avoid alcohol and foods that are high in fat and salt.

According to Fix, compression socks can help to combat deep vein thrombosis (DVT) and passengers should consider staying at a hotel next to the airport if they have an early morning flight so they can get some extra sleep.

There are some natural remedies that can help, as well.

Cinnamon and cardamom are known to help with digestion, fibre helps the body to break down food and chamomile tea promotes sleep naturally as a non-caffeinated herbal drink.

0 0 0 0 0
Previous : Why Is It So Hard To Make Great Food Infographics?
Next : Computer Hogging Your Family Time?