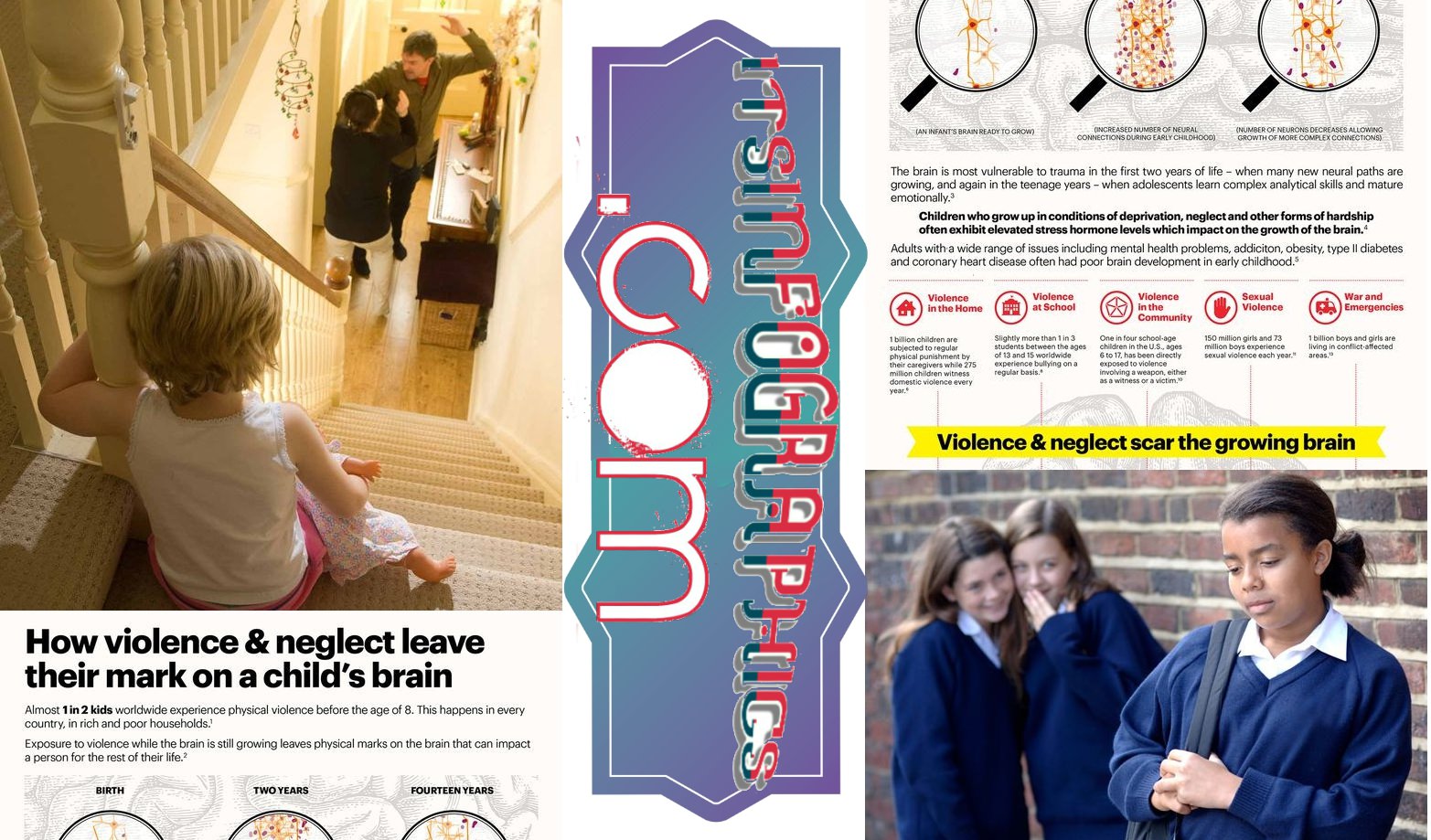 A shocking infographic has revealed that children who endure violence growing up suffer devastating psychological damage long after the physical scars have faded.

[tweet_dis]It shows young people who are hurt themselves or made to watch others suffer in their formative years experience permanent damage to their brains that can have a devastating impact on their adult lives.[/tweet_dis]

They are most vulnerable before the age of two, when new neural pathways are formed, and then again in their teenage years when they learn complex analytical skills and begin to mature emotionally.

The infographic brings together evidence from organisations from academics, charities like UNICEF, and bodies like the European Commission to show the scale of the problem.

One billion children worldwide are regularly physically punished a year while 275 million are made to witness domestic violence in their homes.

This can leave them suffering from post traumatic stress disorder, which can cause permanent changes to their personalities and their ability to interact in society.

More than a third of children worldwide are bullied between the ages of 13 and 15 and are more likely to suffer from psychiatric disorders like agoraphobia, anxiety and depression.

The one billion boys and girls who are victims of conflict suffer damage to their memory, problem solving abilities, emotional and creative expression and social development.

The WithoutViolence, a non-profit which works to end violence against children, compiled the shocking statistics, while emphasising the projects that are helping to heal these mental scars.

These range from projects that reduce sexual violence by fostering better understanding and cooperation to ones that give families the support they need to cope after being forced from their homes by war.

Fabio Venturini, who is Communications and Advocacy Director of the Berlin-based company, said that in failing to protect children from violence, governments were denying these children a good start in life.

He said: “Our infographic brings together just some of the evidence that now exists to prove that violence has a real physiological impact on the brain of a growing child beyond the harm that an individual act of violence might immediately cause.

“What makes this so important is that we can now see that by failing to prevent violence in the lives of children, both as victims and as witnesses of violence, we are failing to give them a real chance to achieve their full potential in life.

“This has far reaching consequences for these children as adults, for their future families, and for the communities they live in. Investing in preventing violence against children is a key way for our politicians and policy makers to give girls and boys their best opportunity to become healthy, productive members of the community.

“The good news is that proven solutions to preventing violence do exist.

“They work, and we can even measure the return on investment in savings on things like healthcare, policing, and increased personal income further down the line when we have adults who are physically and mentally healthier than those who suffered the effects of violence in childhood.”

0 0 0 0 0
Previous : How Long Does It Take To Burn Off YOUR Favourite Junk Food
Next : The Evolution Of The Batmobile [#Infographic]