Roughly a year in the works, Schurz Communications today launched its new “custom cloned” infographic feature on its digital properties that company execs believe could be a boon for business in a range of ways.

“I think this is will be the first place we find revenue and an ROI on sponsored content,” says Kerry Oslund, Schurz’s SVP of publishing and emerging media.

Although the feature is only in its early testing – i.e. Schurz has yet to establish a business model – Oslund says he has high hopes for a host of moneymaking opportunities, from selling sponsorships to allowing other publishers to use the platform. Giving advertisers such as, say, an auto dealer, the chance to use the platform for their own research is an option as well, he says. 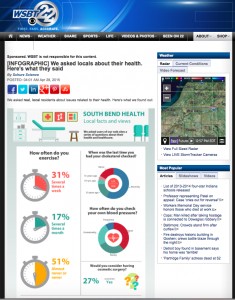 “It’s possible for us to play in this (native advertising) ecosystem if not disrupt it,” he says.

The feature, which is billed as sponsored content on Schurz’s 13 newspaper and TV station websites, uses infographics to illustrate local readers’ responses to polling questions on health, auto and political topics. Polls are conducted on the websites.

Built using the capabilities of Civic Science, the Pittsburgh-based pollster that works with publishers including Schurz, McClatchy and Cox, the new platform automatically tailors content to reflect local markets.

That means that the health-related graphic that appears today on wsbt.com, which is run by CBS affiliate WSBT-TV in South Bend, Indiana, for instance, shows that 31% of respondents exercise several times each week, whereas the aberdeennews.com shows 33% of the people in that South Dakota city do.

“The real magic here is to be able to custom clone,” Oslund says. “We are able to instantly produce info-graphics for all those markets.”

Schurz has yet to decide how frequently new polling questions – and results – will be posted.

“We can do as many as we want, whenever we want,” Oslund says. “What we are trying to understand (now) is the demand and what the model is.”

Civic Science CEO John Dick, who has worked with Schurz for several years on other polling projects, credits Schurz with getting the feature off the ground, as it was the company’s engineers who built that platform that delivers custom content to various markets.

He says he expects it to be successful based on the public’s enthusiasm for participating in polls, which Civic Science has been in the business of doing for the last seven years.

“Tens of thousands of people answer them every day,” Dick says. In fact, that consumers are more than happy to answer polls or take surveys – receiving nothing in return – is a big factor in his company’s success, he says.

“We are all narcissistic voyeurs,” he says. “We like to see how we compare to the world.”

0 0 0 0 0
Previous : Age factors: Age is a major factor that affects what you can do legally.
Next : Baker Goodchild Produces New Infographics Showing How Print And New Technologies Can Work Together