Technology is advancing at such a rapid pace that in 2020, about 5 million jobs will be replaced by automated machines. Self-driving cars will gradually change the way we travel, and artificial intelligence (AI) will soon make decisions for us. We are on the verge of the Fourth Industrial Revolution, an age that will require a new set of skills for the workforce of tomorrow.

The Industrial Revolutions: A Quick Overview

ThoughtCo. describes the term “industrial revolution” as a period of massive technological and socio-cultural change, similar to the time when our ancestors switched roles from hunter-gatherers to farmers.

Humanity has had quite a few industrial revolutions over the course of history. Here’s a quick overview:

The Fourth Industrial Revolution focuses on innovations that harness the potential of emerging technologies such as artificial intelligence, the Internet of Things (IoT), self-driving vehicles, nanotechnology, renewable energy, quantum computing, and biotechnology to name a few.

Because of this explosion of new fields, new markets will emerge which will require a new set of skills for employment. Increasingly smart robots will take over some jobs, and jobs that didn’t exist before will be in-demand.

A new age of work requires a new set of skills to thrive and be productive. Here’s an infographic (see beneath text) on the top 10 skills you need to thrive in 2020.

The Future is Here

And it’s brought a multitude of changes with it. The Fourth Industrial Revolution ushers in a new era where new industries take the spotlight and drive economic and commercial growth while de-prioritizing other industries that can be automated, thereby causing some jobs to disappear.

Like the previous industrial revolutions, the fourth industrial revolution is expected to disrupt the current industries mainly technology, healthcare, and transportation. In 2020, about 5 million jobs will disappear due to automation, according to a 2016 report by World Economic Forum.

As a worker in the future, the only way to survive and thrive is to identify which skills will matter for the industries that will experience unprecedented growth. One example of such an industry booming to popularity is the Internet in what is known as the “dot-com bubble.” This period gave birth to some of the tech giants that we know today such as Amazon and eBay.

Essential Skills in the Future—and Why

In a future where machines seem to be taking the place of humans, ‘human skills’ become increasingly important. These are the skills that would take years to be replicated by machines if it becomes possible down the road.

Creative problem solving tops the list of most essential skills in 2020. The ability to look at problems from different perspectives and come up with effective solutions is a valuable skill to have, given the increasing number of technological innovations that could crop up in the next few decades.

Making sense of huge amounts of data will also be a huge factor of candidates who are looking to enter the IT sector, as more decisions will be based on data gathered from our mobile devices based on our usage of technology. Aspiring software developers and programmers need to cultivate a deep sense of critical thinking and creativity to gain an edge in the future.

While half of the skills needed to thrive in the future are related to cognitive functioning, the other half are more connected to making human connections at work. Collaborating with others on huge projects is a must, as more and more companies will be utilizing agile strategies with their teams to accomplish their goals.

Self-awareness or knowing what you feel and managing your emotions is also a top requirement in the future, especially for leadership and managerial positions. Companies will try to keep up with the pace of technology, and they’ll need more competent and flexible leaders that can take on many hats to rally their team and steer the company in the right direction. 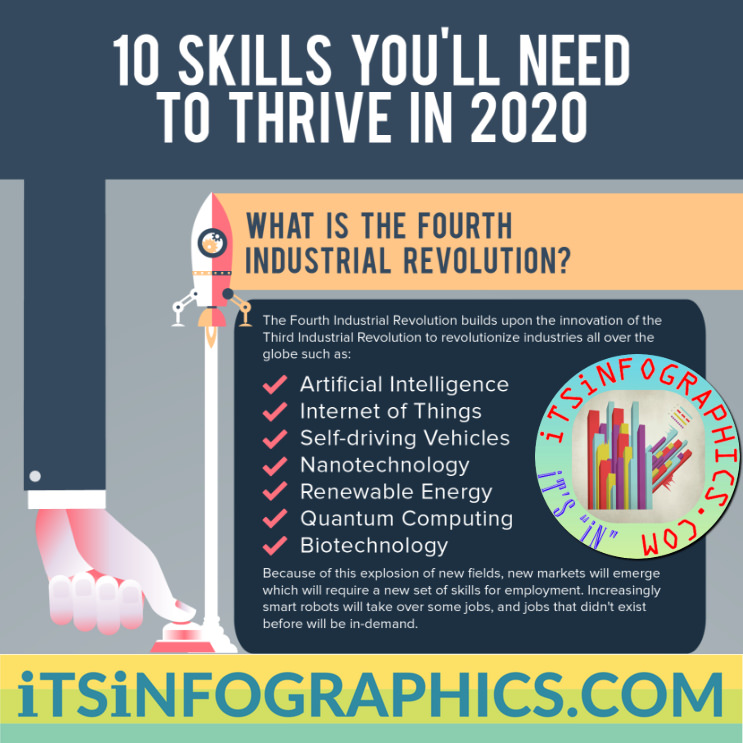 Out with The Old

Just as industries will emerge, various jobs will also appear, while others will get replaced by machines or disappear.

In a blog post by World Economic Forum, the top 5 job families that will take a hit in the in the next five years are installation/ maintenance, construction, creatives/media, manufacturing/ production, and office/administrative jobs.

There is no certainty which exact jobs will see a decline in the next few years, but based on trends, the most affected jobs are those that are now being done by machines.

As work takes on a more abstract instead of physical nature, it’s important to learn the skills necessary to switch careers in the future.

Does this mean that machines will eventually replace humans?

This is a common theory that is popularized by Hollywood movies and sci-fi stories: machines will rise in rebellion against humans. While this would make for a dramatic storyline, it’s unlikely to happen. What’s interesting is the collaboration of human and machine to achieve tasks creatively at a faster rate.

For instance, Toyota has been going the other direction and replacing its robots with humans. Why? Robots may be faster, but humans are capable of innovation and coming up with ideas that ultimately results in improvement.

Creativity is one skill that even AI is struggling to replicate, which is why it will be one of the skills a future worker needs to succeed in the future.

The coming of the fourth industrial revolution will disrupt many industries and kill many jobs, but it doesn’t necessarily spell doom. Investing in skills that will still be relevant even after 5 or 10 years from now is a good move in securing your spot in the workforce of tomorrow.

These are all important things to consider when hiring someone to be a part of your company. Remember, hard skills can be learned, but soft skills like attitude, mindset, and people management skills, are the things that set us apart from a machine of codes and algorithms, are the ones that will matter the most in the future workplace.

0 0 0 0 0
Previous : The complete A to Z guide to personal branding
Next : You NEED friends at work. For SO MANY reasons [Infographic]