Home
Infographics are "IN"!
To explain how startup funding works we first visualized the main thing funding depends on – growth. Essentially it’s a bar chart. The more you grow, the more funding you get.
But what does it mean to grow? Literally when people grow, they move to a bigger place. Companies move to bigger buildings.
Who makes companies grow? People. The more you grow, the more people you have.
We got this far but the devil was in the details. How do you connect all the elements without them being overwhelming?
We went back to sketching and realized that it’s better to visualize equity dilution as the slicing of a pie.
The pies turned into pie charts. The bigger the company, the bigger the pie, and the more people dividing it.
To keep track of who is who we color-coded everyone.
Now we applied data from Paul Graham’s essay. And finally the infographic looks finished.

Read full Funders and Founders article below with infographic.

A hypothetical startup will get about $15,000 from family and friends, about $200,000 from an angel investor three months later, and about $2 Million from a VC another six months later. If all goes well. See how funding works in this infographic: 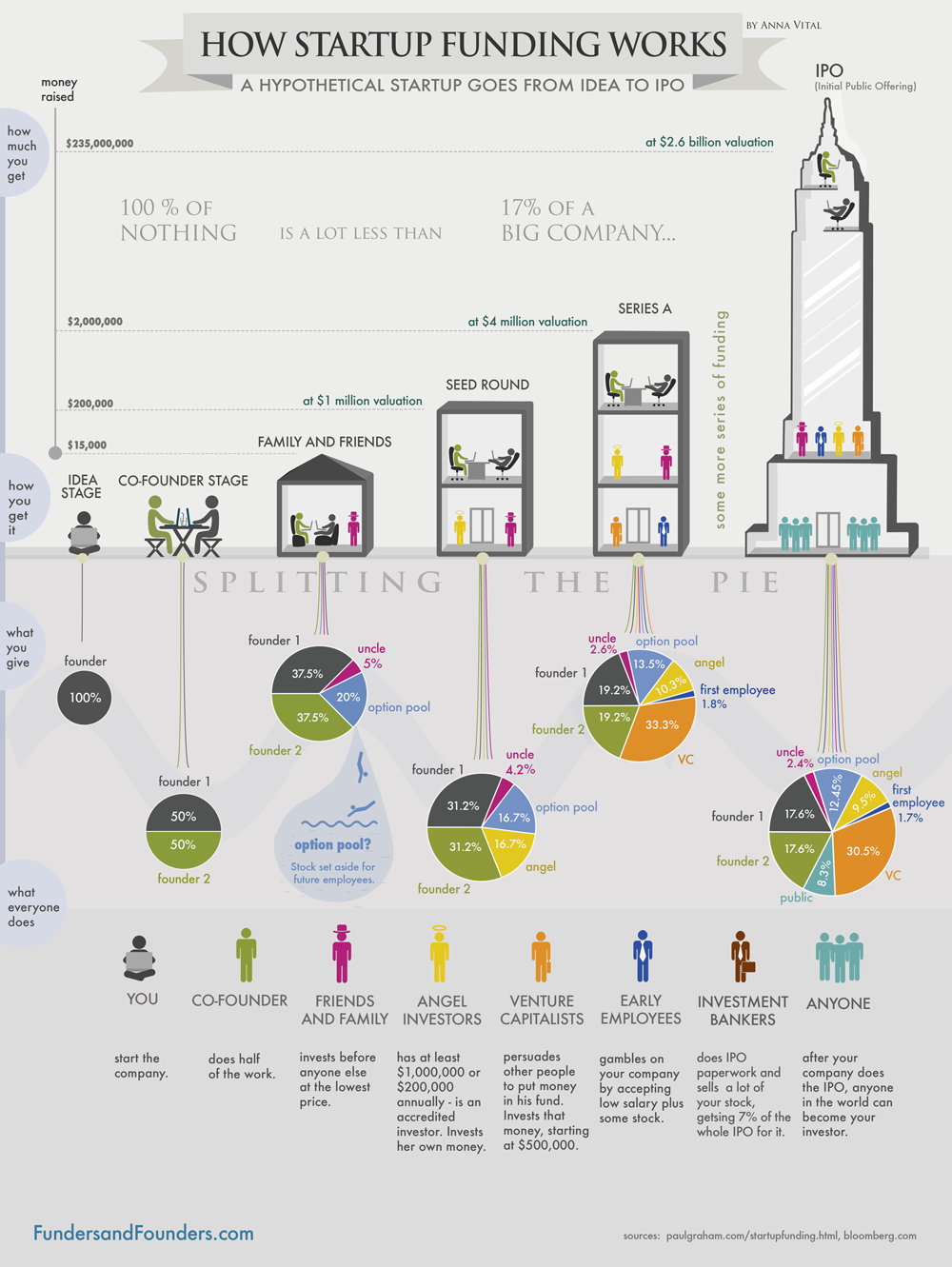 First, let’s figure out why we are talking about funding as something you need to do. This is not a given. The opposite of funding is “bootstrapping,” the process of funding a startup through your own savings. There are a few companies that bootstrapped for a while until taking investment, like MailChimp and AirBnB.

If you know the basics of how funding works, skim to the end. In this article I am giving the easiest to understand explanation of the process. Let’s start with the basics.

When Google went public, Larry and Sergey had about 15% of the pie, each. But that 15% was a small slice of a really big pie.

Let’s look at how a hypothetical startup would get funding.

At first it is just you. You are pretty brilliant, and out of the many ideas you have had, you finally decide that this is the one. You start working on it. The moment you started working, you started creating value. That value will translate into equity later, but since you own 100% of it now, and you are the only person in your still unregistered company, you are not even thinking about equity yet.

As you start to transform your idea into a physical prototype you realize that it is taking you longer (it almost always does.) You know you could really use another person’s skills. So you look for a co-founder. You find someone who is both enthusiastic and smart. You work together for a couple of days on your idea, and you see that she is adding a lot of value. So you offer them to become a co-founder. But you can’t pay her any money (and if you could, she would become an employee, not a co-founder), so you offer equity in exchange for work (sweat equity.) But how much should you give? 20% – too little? 40%? After all it is YOUR idea that even made this startup happen. But then you realize that your startup is worth practically nothing at this point, and your co-founder is taking a huge risk on it. You also realize that since she will do half of the work, she should get the same as you – 50%. Otherwise, she might be less motivated than you. A true partnership is based on respect. Respect is based on fairness. Anything less than fairness will fall apart eventually. And you want this thing to last. So you give your co-founder 50%.

Soon you realize that the two of you have been eating Ramen noodles three times a day. You need funding. You would prefer to go straight to a VC, but so far you don’t think you have enough of a working product to show, so you start looking at other options.

The Family and Friends Round: You think of putting an ad in the newspaper saying, “Startup investment opportunity.” But your lawyer friend tells you that would violate securities laws. Now you are a “private company,” and asking for money from “the public,” that is people you don’t know would be a “public solicitation,” which is illegal for private companies. So who can you take money from?

To give uncle the 5%, you registered the company, either though an online service like LegalZoom ($400), or through a lawyer friend (0$-$2,000). You issued some common stock, gave 5% to uncle and set aside 20% for your future employees – that is the ‘option pool.’ (You did this because 1. Future investors will want an option pool;, 2. That stock is safe from you and your co-founders doing anything with it.)

With uncle’s cash in pocket and 6 months before it runs out, you realize that you need to start looking for your next funding source right now. If you run out of money, your startup dies. So you look at the options:

Now let’s count what percentage of the company you will give to the angel. Not 20%. We have to add the ‘pre-money valuation’ (how much the company is worth before new money comes in) and the investment

(Think of it like this, first you take the money, then you give the shares. If you gave the shares before you added the angel’s investment, you would be dividing what was there before the angel joined. )

How Funding Works – Cutting the Pie

What about you, your co-founder and uncle? How much do you have left? All of your stakes will be diluted by 1/6. (See the infographic.)

Is dilution bad? No, because your pie is getting bigger with each investment. But, yes, dilution is bad, because you are losing control of your company. So what should you do? Take investment only when it is necessary. Only take money from people you respect. (There are other ways, like buying shares back from employees or the public, but that is further down the road.)

Finally, you have built your first version and you have traction with users. You approach VCs. How much can VCs give you?   They invest north of $500,000. Let’s say the VC values what you have now at $4 million. Again, that is your pre-money valuation. He says he wants to invest $2 Million. The math is the same as in the angel round. The VC gets 33.3% of your company. Now it’s his company, too, though.

Your first VC round is your series A. Now you can go on to have series B,C – at some point either of the three things will happen to you. Either you will run out of funding and no one will want to invest, so you die. Or, you get enough funding to build something a bigger company wants to buy, and they acquire you. Or, you do so well that, after many rounds of funding, you decide to go public.

There are two basic reasons. Technically an IPO is just another way to raise money, but this time from millions of regular people. Through an IPO a company can sell stocks on the stock market and anyone can buy them. Since anyone can buy you can likely sell a lot of stock right away rather than go to individual investors and ask them to invest. So it sounds like an easier way to get money.

There is another reason to IPO. All those people who have invested in your company so far, including you, are holding the so-called ‘restricted stock’ – basically this is stock that you can’t simply go and sell for cash. Why? Because this is stock of a company that has not been so-to-say “verified by the government,” which is what the IPO process does. Unless the government sees your IPO paperwork, you might as well be selling snake oil, for all people know. So, the government thinks it is not safe to let regular people to invest in such companies. (Of course, that automatically precludes the poor from making high-return investments. But that is another story.) The people who have invested so far want to finally convert or sell their restricted stock and get cash or unrestricted stock, which is almost as good as cash. This is a liquidity event – when what you have becomes easily convertible into cash.

There is another group of people that really want you to IPO. The investment bankers, like Goldman Sachs and Morgan Stanley, to name the most famous ones. They will give you a call and ask to be your lead underwriter – the bank that prepares your IPO paperwork and calls up wealthy clients to sell them your stock.  Why are the bankers so eager? Because they get 7% of all the money you raise in the IPO. In this infographic your startup raised $235,000,000 in the IPO – 7% of that is about $16.5 million (for two or three weeks of work for a team of 12 bankers). As you see, it is a win-win for all.

Being an Early Employee at a Startup

Last but not least, some of your “sweat equity” investors were the early employees who took stock in exchange for working at low salaries and living with the risk that your startup might fold. At the IPO it is their cash-out day.

0 0 0 0 0
Previous : How Elon Musk Started
Next : The History of Online Gambling

Halloween Spending At An All Time High [#Infographic]

33 Incredible Periscope Tips from the Most Popular Scopes

What Are You Using Your Smartphones For?

Interview Questions To Ask or Not To Ask

A good example of using picture as a background

Even Vegas Was A Gamble

The Cost of Wasted Food [Infographic]

Are These The 10 Greatest Marvel Infographics of All Time?

71 Free Online Courses and Tutorials You Haven’t Tried Before

The Best Infographics of 2015

Search Ranking Factors Infographic 2015: Understand how the deck is stacked

The Blockchain: Capital markets use cases

Elevators vs Stairs: How Long Does it Take to Reach the Top of These Famous Structures

The Future Of eCommerce

Here’s How to Perfectly Optimize Your Infographic for SEO

Bad Bourbon And How It Got Better

5 Steps To A Successful Job Search

CVs and Résumés: Get Them Right to Get the Job

5 Tips for Effective Integration of Sales and Content Marketing