For someone who’s burned out on infographics, thanks to the bevy I receive in my email almost daily from corporate America, it’s surprising that the first book review I’m attempting is on, well, a collection of infographics. But that’s how it goes sometimes. You’re enchanted by exactly the thing you proclaim to despise.

It happened a few weeks ago, while browsing Nashville’s Parnassus Books. I was looking for nothing in particular when I noticed the cover* for Gareth Cook’s The Best American Infographics 2015

(BAI) and picked it up. Scanning the pages, it was like the grown-up version of the large, visually-dazzling books I enjoyed as a child: the Where’s Waldo?‘s and Magic Eye‘s of the ’90s book fair world. I used to live for those texts, especially Magic Eye, sitting cross-eyed in the back of our minivan until I either saw the damn Tyrannosaurus Rex I was promised, or developed a substantial migraine. Usually the latter.

BAI is all the entrancing qualities of these books, minus the king-sized bottle of Excedrin you needed to finish them. Divided into four sections–“You”, “Us”, “Material World”, and “Interactive”–Cook has weaved together a menagerie of visual data that leaves you wondering, “How much time did these take to create?” I can spend 20 minutes debating which color socks to wear to work, and yet somebody was able to, in less than a decade, concoct a fascinating graphic of all major New York City restaurants, their chefs, and how they’re all connected in one way or another (“Who Cooked With You?” from New York Magazine December 29, 2014). Clearly these are the same people who dig up obscenely obscure sports statistics, reminding us that, the batter who just hit the home run in the fifth, after striking out in the first, walking in the third, and adjusting his jock strap eight times in the fourth, is the first to do so in Major League postseason history. I love these kinds of people. And at times, I wish I was one. But I’m not, so I’m thankful for this book.

There are moments, however, when some of the infographics were a bit overwhelming, or a little confusing in how to read. (I shamefully skipped over “How Fast Do Ideas Move?”, which outlined how quickly new discoveries have impacted various scientific fields. I also didn’t bother blinking at “Chess Trends,” as I don’t play chess and have no idea what the corresponding first moves even mean.) But overall, I found myself smiling or nodding at the pages.

Particularly enjoyable was “Names By Profession”, which analyzed the most common names found in various fields. [tweet_box design=”default”]Is it any surprise that a majority of male ranchers are named “Leroy”? And that their wives may frequently go by “Judy”?[/tweet_box] How about historians named “Theodore”, or weather men named “Bill”, “Jim”, “Mike”, or “Jeff”? I felt as if I’d stumbled upon Fred Armisen’s and Carrie Brownstein’s secret tool for choosing character names in Portlandia. I was also relieved to find my name, Christopher, absent from any of the career choices–most likely because, over the past ten years, we’ve (I’ve) tried every single one. (Click on the image below to take a closer look for your name.) 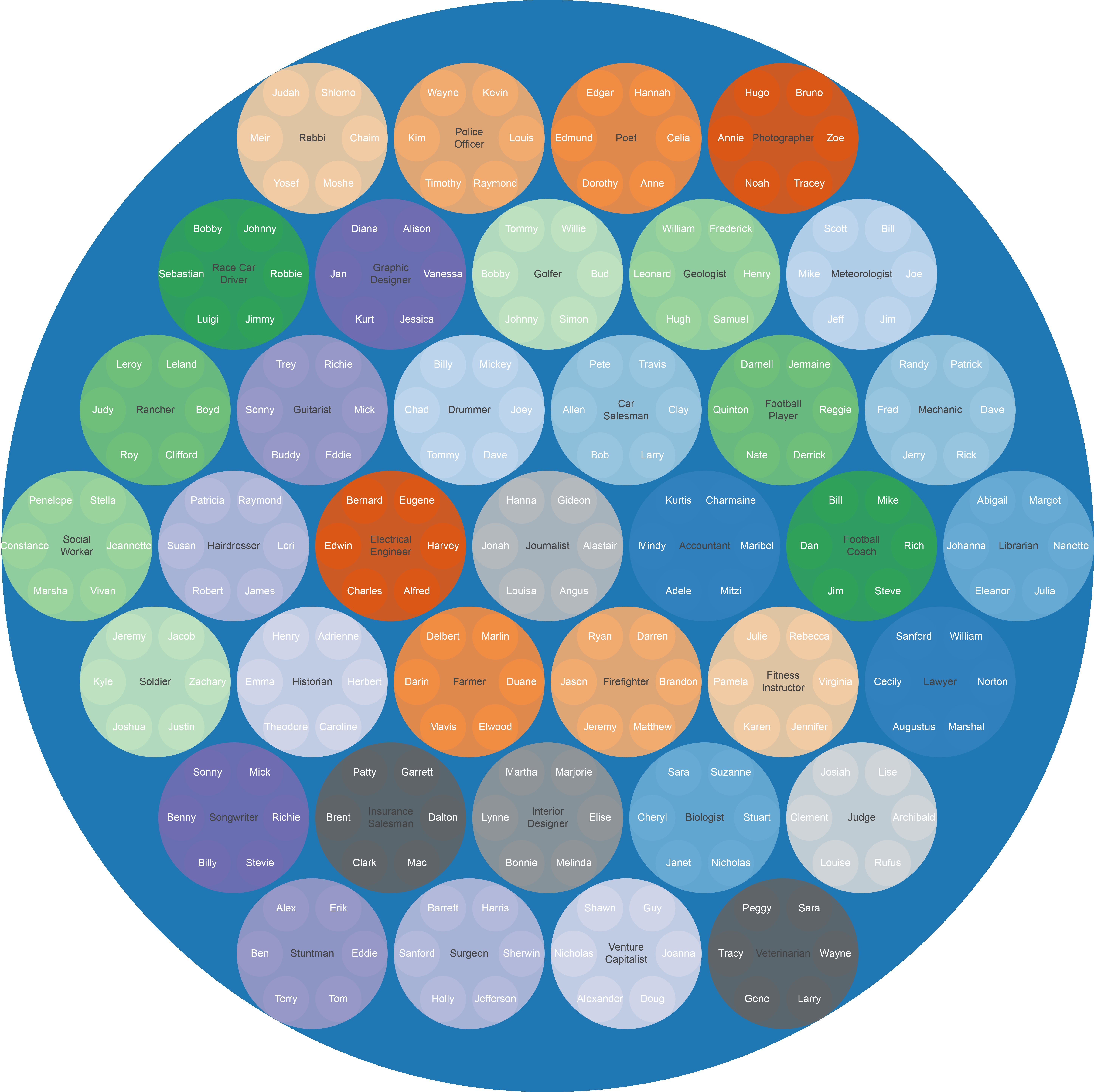 There were also those that stunned me, like the Washington Post‘s “What A Soldier’s Arm is Worth” (below), or New York Magazine’s “Women of ISIS”. You spend a lot of time thinking ISIS members resemble the AK-47-toting villains in True Lies, so when you read the tweets from one that sounds like a staff writer for Betches Love This, it throws you for a postmodern loop. Who knew female ISIS members liked pancakes with Nutella on them? So does my girlfriend. Who knew they also used “LOL” and laughing-until-they-cry emojis? So does my girlfriend**. 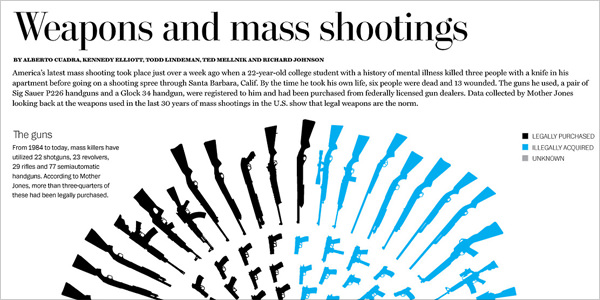 Overall, the book possesses the rare quality of being one you could leave either on your coffee table, in the waiting room of your office, or on the water tank of your toilet***. It’s chic and thoughtful in design, and provides the reader with a new arsenal of facts to fire at partygoers gathered around the cheese plate:

“Did you know it took fourteen days and 4,815 miles for those grapes to end up next to the gouda?” (See “A Moveable Feast” from National Geographic on page 30)

“Did you know you Honolulu residents spend more than 40 hours per week in traffic?” (See “Commuter Science” from National Geographic on page 44)

“Did you know that the age of Miss America oddly correlates with murders by steam, hot vapors, and hot objects? (See “Spurious Correlations” by Tyler Vigen, page 54)

Personally, I can’t wait for the next baby shower.

0 0 0 0 0
Previous : 14 Most Important Metrics to Focus in Your Digital Marketing Campaign [ #infographic]
Next : Best task management ideas to ease your work

How does climate change empower terrorism?

How to meditate [#Infographic]

What’s In Your Credit Score?

Guide To Releasing Music As An Independent Artist

The History Of Google’s Biggest Changes Over Time

Rude hand gestures from around the world

Gods And Religion In Shakespeare’s Work

One picture is worth… how many words?

How to Live Like a Creative: the daily habits of a modern creative

How to Zombie-Proof Your Home

How Are People Really Using Snapchat

The Rundown Of Super Bowl 50

How to Avoid Communication Mistakes For A More Successful Marketing

How To Watch The Super Bowl Online

6 Must-Have Components To A Powerful Infographic

The top 8 ways to create a sustainable home

A Look Into The World Of All Things Kissing-Related

Why Cats are Better than Men

6 Easy Things Scientists Can Do to End Pseudoscience

Why Do We Love Cats So Much?

#Household items can be #toxic to #pets [#Infographic]

How are we influenced?

Is going to college a weight gainer?

Which Chinese zodiac are you?

The 6 Most Popular Personalities For Social Sharing

How social media automation can work for your business

The Evolution Of A Scientific American Infographic: Secret Life In Household Dust

How Branding And Packaging Affect The Way Consumers Trust Food

All You Need To Know About Deadpool Contained In This Infographic

The Evolution Of The Storefront [#Infographic]

Workplace Customs From Around The World

11 Soft Skills Every Manager Must Develop

So you want to be a HOBO

How to set up a social media cross-promotion plan

How Our Brains Respond to Different #Content Formats [#Infographic]

An Inside Look At Millennial Credit Profiles

The Benefits of Holistic Therapy for Substance Abuse

What to Do if You Get Ebola [#Infographic]

How To Steer Clear Of Trouble While On The Road Abroad: The Most Unusual Driving Laws Around The World

How To Increase Revenue From Apps

The Future Of Technology In Films

Auto Repair At a Glance

Personalization Is A Big Challenge For Digital Marketers

The REAL Effects That A Holiday Has On Your Health

Use Infographics To Extend Your Reach And Establish Credibility

2015 Auto Industry: From Recession To Recovery To Record Sales

More Americans Are Saying Goodbye To Cords And Cable

The Most Bizarre Laws Still In Place Across The U.S.

The Best And Worst Of Freelance Writing Gigs