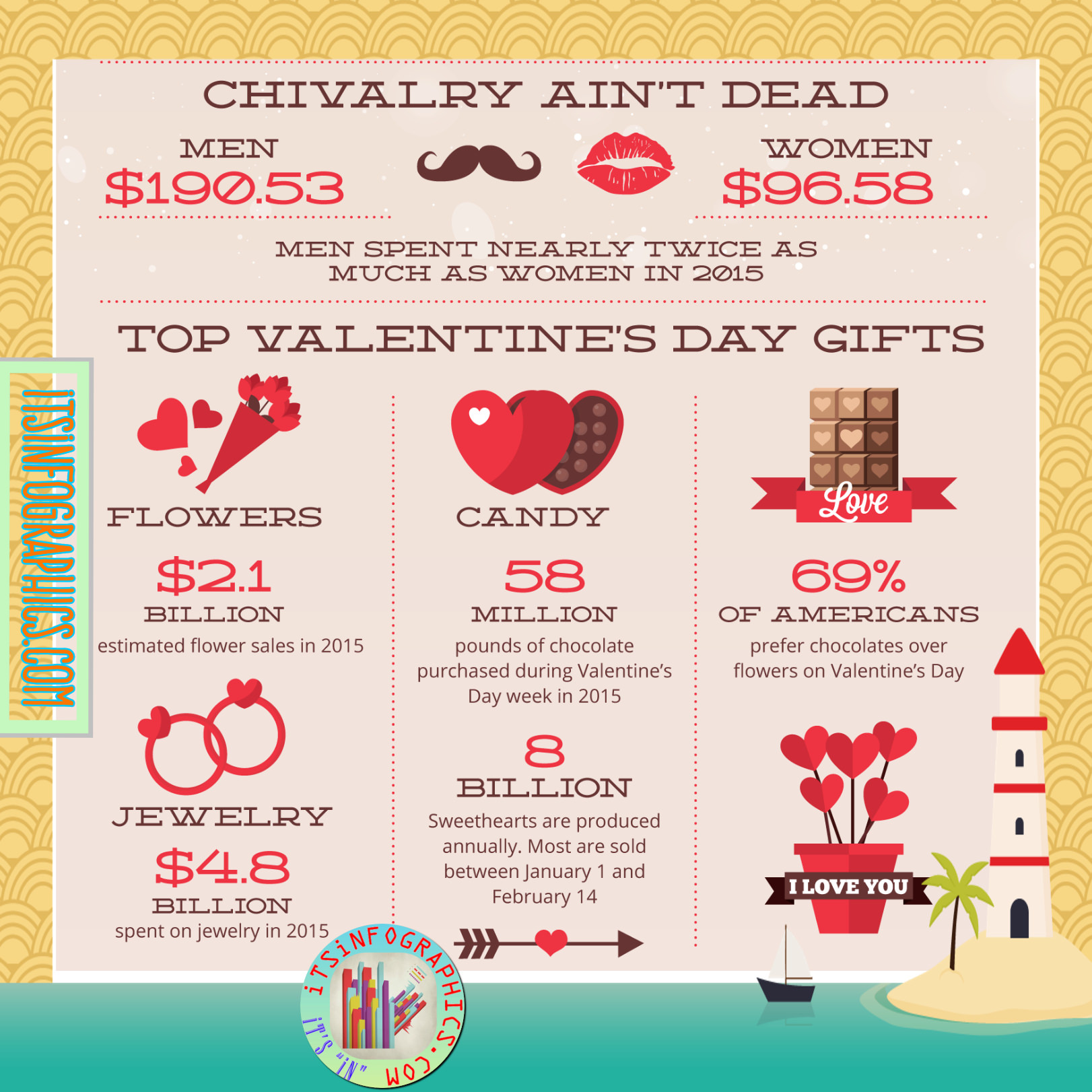 Some call it a “fake” holiday, but the numbers seem to disagree. This infographic details what exactly Americans spend their Valentine’s Day dollars.

When you break it down along gender lines, you can see who really holds the power in the country. Men spent an average of $168.74 on gifts alone in 2012 – nearly twice as much as women, who spent $85.76. Most men prefer gifts first thing in the morning, while women prefer a gift after a nice dinner. (There are no official stats about which gender pays for dinner, so we’ll let you guess!)

If you think the older someone is, the more likely he or she is to spend more, think again. Puppy love seems to be a strong driver, with younger Americans aged 25-34 forking out the most on Valentine’s Day at $176.85 each, followed by 18-24-year-olds who spent $148.05. Americans aged 35-44 spent less than their younger counterparts at $141.82; from there on, the spending diminishes consistently with age.

People in the Northeastern part of the country are the biggest spenders on Valentine’s Day, dedicating an average of $146.30 per person to their romantic gestures in 2012. The Southern states followed with $128.67 per person, then the Western states with $119.82, with the Midwest locking up last place at $110.96.

The majority of Americans (89%) buy Valentine’s gifts for their spouse or significant other, 61% give gifts to their kids, parents and other family members, while 25% buy gifts for friends. In general, 4% of all Valentine’s gifts are given to pets, amounting to a total of $722 million in 2012. Young people are especially indulgent of their pets, as 30% of those aged 18-24 devote an average of $41 to pet gifts.

Even Valentine’s Day has a few Scrooges, though. Of single Americans, 51% do not buy any Valentine’s gifts at all. We feel 100% badly for their moms.

Greeting cards are the most popular Valentine’s gift, with 52% of surveyed Americans spending an average of $13.33 on cards, amounting to a total of $1.5 billion in 2013. In fact, after Christmas, Valentine’s Day sells more cards than any other holiday, and there are 141 million Valentine’s cards exchanged across the globe every year.

Half of Americans give chocolate or candy to their sweethearts, at an average cost of $21.47, or a total of $1.6 billion, in 2012. Richard Cadbury (recognize that last name?) invented the Valentine’s Day candy box and, in 1868, released the very first chocolate box in history. The box was decorated with a painting of his young daughter holding a kitten in her arms. 36 million heart-shaped boxes of chocolate were sold for Valentine’s Day in 2011.

A total of $1.9 billion was spent on flowers for Valentine’s Day in 2013. Most (73%) of those flowers were bought by men, but the remaining 27% were bought by the fairer sex. In fact, a self-lovin’ 15% of American women send themselves flowers on February 14th.

Jewelry remains a popular big-ticket Valentine’s gift, with 19% of people buying jewelry in 2012. The total spent on gold, silver and diamonds in 2013 was $4.4 billion, fueled in part by the six million who had been planning a marriage proposal that year. In fact, 11% of engagements across the U.S. occur on Valentine’s Day.

A whopping 85% of U.S. citizens believe that sex is a crucial part of Valentine’s Day; a Durex survey states that condom sales are 20-30% higher around Valentine’s Day than any other time of year. We wish you a happy and healthy holiday, but be prepared! March sees more at-home pregnancy tests sold than any other month.

Experts expect Americans to spend nearly $20 billion for Valentine’s Day, including $680 million on our pets! It may be true that you can’t buy love, but over half of women surveyed say they would dump their man if they didn’t get a Valentine’s Day gift. Learn more about the cost of Valentine’s Day, and see how it compares year on year.

A word to the wise, gentlemen: over half of the women surveyed admitted they would dump their man if he showed up empty-handed on February 14th.

This year, fewer Americans are celebrating Valentine’s Day than before, but those who are celebrating will spend more! Check out this infographic below to learn how we’re planning to spend a record total of $20.7 billion on gifts for others and for ourselves, then see how it compares year on year.